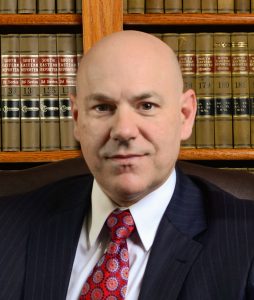 Originally from Macon, Georgia, Jeff Stephens holds a Bachelor of Science degree from Georgia Tech, and a Juris Doctorate degree from the University of Tennessee. He served as an enlisted Marine Corps reservist in college and law school and was later commissioned as an officer. Jeff spent 10 years on active duty as a Marine Corps judge advocate, finally retiring from the Marine Corps Reserve after 22 years of service in 2016. Jeff’s military assignments included serving as a prosecutor, defense counsel, and recruit training company commander at Marine Corps Recruit Depot Parris Island, assignments as an Appellate Defense and Appellate Government attorney with the Office of the Judge Advocate General of the Navy, and deployments to Fallujah, Iraq and to Bahrain as an operational law attorney. After leaving active duty, Jeff served for 5 years as an assistant solicitor for South Carolina’s 14th Judicial Circuit, prosecuting crimes committed in Beaufort and Jasper counties. He served for 3 years as a Beaufort County assistant public defender, and has been an attorney with the Quindlen Law Firm, P.A., since 2012. Jeff and his wife have 4 children who are almost all out of their house in Beaufort, SC.

Jeff’s focus of practice is military, criminal, and criminal appellate law. He has been cited in the following military appellate cases:

Court of Appeals of the Armed Forces

U.S. Court of Appeals for the Federal Circuit

Jeff in the news

Read about this case: @WTOC

Civilian charged with 2017 murder in Jasper County, SC, found Not Guilty at May 2021 jury trial, despite confession and DNA evidence.

Read about this case: @Islandpacket.com